Mattel and Hasbro May Merger 0

Hasbro and Mattel are talking about a merge according to a report on Bloomberg Business.

Hasbro Inc. and Mattel Inc. have held talks about merging two of the world’s biggest toymakers, according to people familiar with the matter, in a deal that would bring together the owner of the My Little Pony and Furby brands with Barbie and Hot Wheels.

This is not the first time a combination has been talked about. Two decades ago — almost to the day — Mattel withdrew a $5.2 billion offer for Hasbro, citing an “intolerable climate” created by its competitor’s use of the media and politicians to fight the proposed takeover. Back then, Hasbro resisted the deal in what Mattel described as a “scorched earth” campaign to stop it.

A merger might not face that many antitrust hurdles because the U.S. toy industry is very fragmented, according to Jaime Katz, an analyst at Morningstar Inc. If combined, the companies would have probably about one quarter of the market in the U.S., she said.

Mattel as been struggling since the lose of the Disney product licensing.  One interesting thing to note is Mattel makes DC figures and Hasbro makes Marvel Figures. Are you in favor of this or do you think it could kill some of your favorite toy lines? 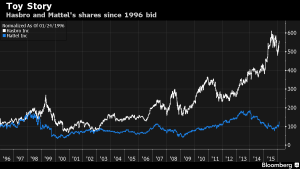