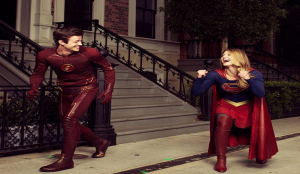 “After months of rumors, ComicBook.com has learned that Grant Gustin will appear on Supergirl in his role as Barry Allen/The Flash next month.

Gustin will head to National City on the series’ March 28 episode, the details of which haven’t yet been released.”

Could this mean Supergirl can crossover with Arrow and Legends of Tomorrow? Let me know what you think below